In a previous article I highlighted the problems in fully utilising the availability of wind energy, and other renewable sources due to the fluctuating levels in the supply and demand of electricity. The traditional means of achieving this is through having large numbers of generators on standby.  Alternatively, some type of energy storage system can be used such as pumping water high into a reservoir  when there is an excess supply of electricity which is then released through a hydro-electric scheme during periods of high demand.  The use of electric battery powered vehicles might also provide an additional storage medium.  However, these are limited in capacity, and the widespread use of renewable's won’t be possible without introducing more expensive storage systems which will restrict their potential without substantial subsidies. These are economically difficult to justify, as well as being politically impractical to implement due to widespread public pressure to limit energy prices. Here I describe an alternative method.

In his book ‘sustainable energy without the hot air’ David McKay calculates that heat pumps are more efficient than Combined Heat and Power Systems. However, it is possible to get the best of both worlds by using a natural gas powered internal combustion (IC) engine to drive a heat pump, and using the waste heat from the engine for space heating.

Whilst this is an attractive proposition in energy terms, this doesn’t help with balancing the intermittent electricity from renewable sources of energy. However, what if in addition to a gas engine, the same heat pump can be driven electrically as well?  This opens up the possibility of being able to use renewable sources of electricity to drive heat pumps for space heating when there is an excess renewable supply.  When the supply is limited, the heat pump can be driven from the natural gas engine without the need for any complex and inefficient storage or back up generators. The natural gas engine is effectively acting as a back up supply, but in a far more efficient manner than if the gas was used for generating electricity or space heating directly.

Powering an heat pump from both a renewable electrical and IC engine source opens up still more interesting possibilities.  In certain vehicle hybrid drive systems the engine, electric motor can be combined through a single drive system, often an epicyclic gearbox. This allows the engine and/or the electric motor to drive the vehicle or the engine to drive an electric generator (which could be the same electric motor operating in reverse).  If a similar idea is used for a local heat and electricity generation in a building, industrial estate or local community we would have a highly flexible energy system.

This concept is illustrated below. A heat pump is linked by an IC engine and electric motor through a three way gear train.  The heat pump is normally powered from renewable electricity for space heating.  However, when the renewable supply is limited such as when there is no wind, the same heat pump can be powered from the natural gas engine, with the waste heat from the engine also being used for space heating.  This natural gas engine can also power the motor in reverse so it acts as a generator to provide internal electricity or export it to the mains during periods of high electrical demand. This system assists the expansion of renewable electricity not only by providing a local standby generator, but also by effectively adding an efficient space heating system into the electricity equation which can easily be flexibly interchanged with an efficient natural gas energy source acting as standby.

So where is the transport angle in  this?  Well, the greater availability of renewable electricity should allow a greater proportion of battery electric transport to be charged from these sources, making them genuinely low carbon.  Once again this demonstrates that by managing our energy in a more strategic fashion we can achieve far more than with any isolated system. 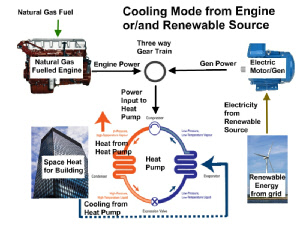 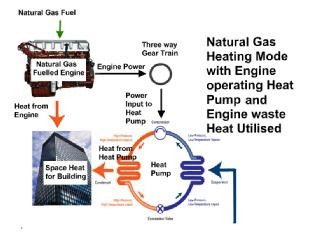 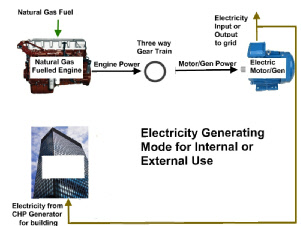 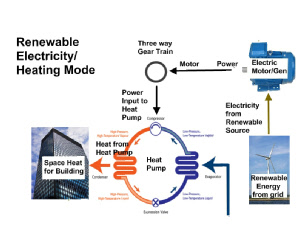